My wife and I were happy for twenty years. Then we met.
- Rodney Dangerfield

A few weeks ago, another guitar showed up on my doorstep. I would have refused the delivery, but I happened to be in the powder room when UPS dropped it off. 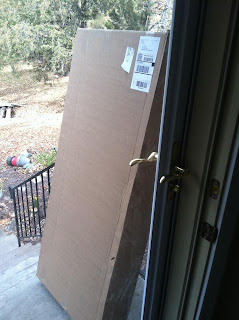 Apparently, when your husband tells you that you can't get a pedi because "we're broke," that's man code for "I just bought another guitar." But what makes this purchase acceptable is that the box contained, not just another ordinary guitar, but a bass guitar. So now Mr. V can master the intermediate level of all the songs on his Rocksmith game on practically a whole 'nother instrument. And for the time being, at least, he has ceased playing those same two or three "Simple Man" tabs over and over again. It's a win-win situation over here.

Mr. V seems to enjoy surprising me, from time to time, with gifts for himself. Or for "us," if he's feeling guilty about something. But the surprise factor does not always work out as he had planned. Here, let me illustrate:

Exhibit A: The Anniversary Gift
This year, my first anniversary surprise was Mr. V going to Las Vegas for a business trip, on our anniversary. But before he left, he told me to keep an eye out for a package, which would be arriving any day now. ("It's for us," he said. "For the living room.") That afternoon, a rather large, heavy box turned up on my doorstep. I brought it inside and opened it up with anticipation. Inside the box I saw... 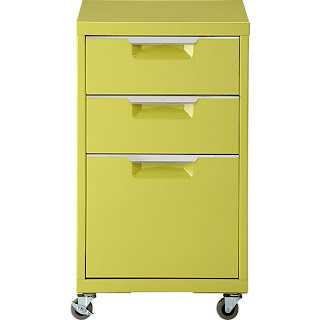 I was now faced with a couple of problems. Besides the obvious (He got me a file cabinet. As an anniversary gift. For the living room.), there was the small matter of A) How can I make this chartreuse yellow file cabinet work with my home decor? or B) How do I tell him tactfully that I don't want this thing in my living room? Then came his text message: "Did the gift arrive yet?"

"What do you think?"

"It will be useful, and it's a very interesting color."

Then he asks me to send him a picture. I oblige, and a few minutes pass before he responds: "Is that a file cabinet?!?"

As it turns out, Crate & Barrel sent the wrong item. We were supposed to have received a set of walnut side tables. It's a pity I hadn't known that before I let the kids destroy the big, fun box it came in.

Exhibit B: The rifle
As the saying goes, "A lady with a gun has more fun." I can't argue with that, but the manner in which I discovered said gun was a bit unpleasant.

We were headed up north recently with the kids and the dogs for the weekend, and we had almost reached our destination when I heard a strange sound coming from the back of the SUV. The sound was followed by an all-too-familiar odor.

"Honey, I think one of the dogs peed back there," I said. I unbuckled and climbed around for a better view. Sure enough, someone couldn't hold it any longer and emptied out on top of a long, narrow box that I had never seen before.

"Since when do we own a rifle?"

"Since yesterday. It's for us. I was going to surprise you with it when we got there, but the stupid dog ruined the surprise."

Mary Louise Valentino was born on Saturday morning, May 23, 2009 at 10:11 am. She weighed 8 lb 6 oz, was 20 inches long, head circumference 14" and chest 13.5", a nice, healthy baby girl!
I was induced on Friday night the 22nd because my blood pressure had gone up; combined with my consistently high proteinurea, this is by definition pre-eclampsia. Doc had been worried about my protein for a while and was nervous about waiting for me to go into labor naturally, especially since I was at 40 weeks anyway. She apologized several times because she knew how much I wanted to avoid induction, but she really felt it should be done. She did do a membrane sweep in the clinic before I went over to the hospital, and I started contracting while I was still in triage.
They got me to my room a few hours later and I was contracting enough that they skipped the cytotec and went straight to a low dose of pit at about 11:30 pm. I remained dilated at 2 cm all night but I went from 40% to almost 100% and was tired enough to sleep through most of the contractions during the night! By about 8 am I was getting really uncomfortable, the doctor came in wanting to break my water... I figured what the heck, I've been here all night, nothing is going as I hoped anyway and I don't want to go home without a baby... so I agreed to it but then I started crying after he did it, saying I didn't want him to break my water. He looked a little alarmed because it was too late! But what I meant was that this was not what I originally wanted and I was nervous about the whole induction thing after my awful experience with Ella's birth and I was so afraid something was going to go wrong. As it turned out, things went really smoothly, and really FAST after that.
I went from 2 to 6 cm in about half an hour, and when the nurse asked if I wanted nubain (sp?) I took it. I still felt every second of every contraction but it helped me to relax in between rather than worrying about how horrible the next one was going to be.  This was around 9:15, and at 9:30 or so she had me roll to one side and as soon as I did that I wanted to push every time I contracted. So she checked me again and I was all ready to go and they got the doctor. I only ended up having to push through about 5 contractions, and Mary was born at 10:11 am. I told Paul to try to make sure he had the camera ready to get a picture of her on my chest immediately, and he did (I haven't seen it yet though!). Mary looked great, she came out screaming, and I WAS SO RELIEVED! I was able to try breastfeeding almost immediately, which I did not get to do with Ella due to all the complications, and she is doing pretty well with that so far, too. She looks a lot like Ella did as a newborn, but with lighter hair. She is named Mary Louise after my grandma on my dad's side, who passed away 10 years ago, and I think she is the prettiest baby in the nursery :) Ella got to meet her yesterday and she really liked her. My parents were down here yesterday too caring for Ella overnight while Paul was here with me, so they got to see her too, and Becky & Chris are coming down some time today. I'll be discharged on Memorial Day :)
I'm feeling pretty good except that every muscle in my body aches and I'm sore "down there" which is all fine and normal. Mary spent most of the night in the nursery although I told them to be sure to bring her to me any time she needed me. I just wanted to not be woken up by every little squeak during the night last night! :) The pediatrician is checking her out now and Paul and Ella are on their way over to visit us.
Posted by Amy at 7:44 AM 1 comment: